Stanbroke helps Eddie’s Van share meals with those in need 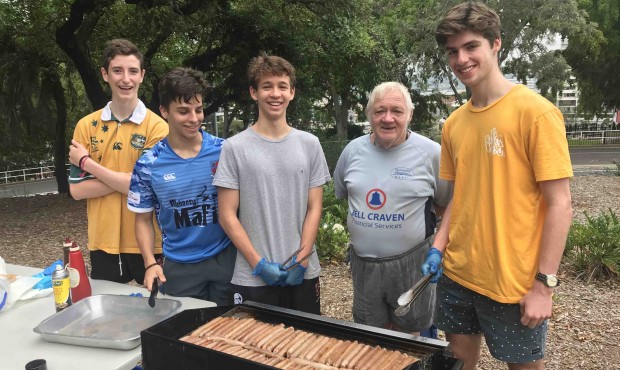 It’s a simple meal which means much more than just a good feed.

Each weekday morning, students and staff from St Joseph’s College in Brisbane’s Gregory Terrace run Eddie’s Van to serve a breakfast of sausages, eggs and buttered bread to between 25 and 45 homeless people.

“It allows homeless people in Brisbane to start their day off with a substantial meal and a conversation,” Paul Antenucci, Head of Campus Ministry at St Joseph’s College Gregory Terrace said of the school’s involvement.

“Eddie’s Van helps to create a place a community and allows those attending to feel connected with others.

“While the boys are there to help, there is no question that doing so has a big impact on them. It helps them to understand the circumstance some of these people are in; we see them developing connections with each other.

“The program also leads to greater conversations within the school community about the issues of homelessness and social justice.”

The concept for Eddie’s Van was developed in 1998 staff & students of St Joseph’s College. Today, Eddie’s Van is a mainstay of comfort for Brisbane’s homeless.

Each day the school has four to five students volunteering at Eddie’s Van and there is a waiting list of other students who want to get involved as well.

The students are drawn from the Year 11 and 12 populations with some Year 10 students also participating. Each morning at 6.15, student volunteers meet up with two or three staff volunteers, regardless of the weather or season.

Eddie’s Van also has a presence on the street of a night, staffed by former students of St Joseph’s College serving tea, coffee and soup.

“Yesterday morning we took the new group of students to work at Eddie’s Van and they were all really intrigued,” Mr Antenucci said in early February. “And after a quick chat, they often find they have a lot in common.

“We find that serving a meal is a simple and practical way of helping both the physical health and morale of some of those living on the street. What we also really emphasise to our students is the importance of having a conversation and to have a consistent presence once they agree to be part of the program.

“Each year we have done this, we have found a little community is formed and genuine connections are made. There are some gentlemen I have been interacting with personally for nine years now.”

Mr Antennuci said programs such as Eddie’s Van could only exist with the support of companies which donate food supplies and funding, including Stanbroke.

“Stanbroke has been a supporter of ours for six years now and provides all the sausages which are served for breakfast,” he explained.

“The company has also provided financial support for Eddie’s Van. It is that kind of support which makes our program sustainable.

“And it is clear these programs are important and they matter.”

Stanbroke’s Managing Director Brendan Menegazzo said the company was incredibly proud to support those in the community most in need while also building empathy and understanding in tomorrow’s future leaders.

Eddie’s Van can be found opposite the Brisbane Private Hospital on Wickham Terrace each weekday morning from 7am.